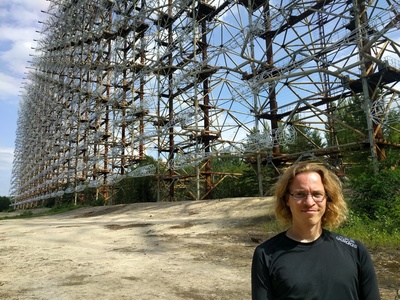 Standing in front of the antenna of the infamous "Russian
Woodpecker" / Duga radar in the Chernobyl exclusion zone (2018).

Born 1983, married, no children. Engineer, pacifist, vegan, atheist. First licensed (as DG9YFK, VHF+) in November 1997 at the age of 14, upgrade to DJ1YFK and first contacts in Morse code in March 1998, changed to DJ5CW in December 2021. Also holding an US extra class license (WB6LQR, ex AD5UR) and the Polish callsign SO5CW.

I grew up and developed my interest in amateur radio in Rheine, JO32QG, from where I mainly operated between 1997 and 2003. My first callsign was DG9YFK (VHF/UHF only), issued on my 14th birthday. In early 1998 I took the Morse code exam, received my new callsign DJ1YFK and started operating on the HF bands with a FT-301 and wire antennas in CW only (often QRP), later upgraded to a FT-890 and eventually I started building my own equipment, e. g. for the longwave band at 136 kHz.

My main interests which I developed at that time, high speed telegraphy and contesting, have followed me through my whole ham life so far.

After finishing school, I spent five years studying electrical engineering (with a focus on RF technology) at the Dresden University of Technology, often operating and contesting on the HF bands from the campus club station DL0TUD in JO61UA, and from DM7A on the Fichtelberg, JO60LK contest location, mostly on 23cm. 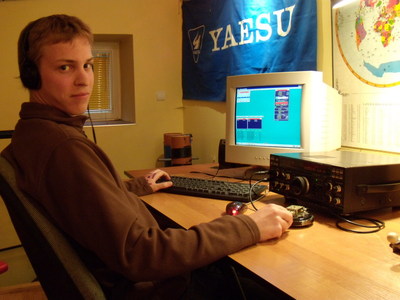 After graduation from TU Dresden with a diploma in electrical engineering, I am living and working as an engineer (RF and embedded stuff) in Munich, Bavaria (JN58SE). As time permits, I enjoy getting on the air from the local contest station DL1A / DM9K (@DJ6ZM) (QRT) or from the club station of the Siemens Employees' Amateur Radio club DL0SA. At home I have a small station (Elecraft K2, 10W) with a 15m long vertical antenna on top of a 4 storey building (extended through an open skylight window), which works surprisingly well.